Hailing from London’s East End, the 4 Skins were there at the very start of the Oi! movement, making their debut on the seminal “Oi! The Album”. They also appeared on the follow up “Strength Thru Oi!” and “Carry On Oi!” compilations as well as issuing the ferocious debut “One Law For Them” 45, all whilst fronted by the legend that is Gary Hodges.

When he departed at the tail end of ’81 the bands roadie, Panther, took over and did a fine job on the “Yesterdays Heroes” and “Lowlife” singles as well as the essential long player “The Good The Bad The 4 Skins”. Panther then too decided to move on and into the breach stepped one Roi Pearce, ex of the Last Resort, who took charge of the band on the “A Fistful Of 4 Skins” and “From Chaos To 1984” albums.

The line up changes never diminished the great songs no matter who sang them – “ACAB”, “Sorry”, “1984”, “Evil”, “Chaos”, “Wonderful World”, etc.. – all Oi! anthems from a group regularly viewed as the ultimate Oi! band.

A FISTFUL OF 4 SKINS 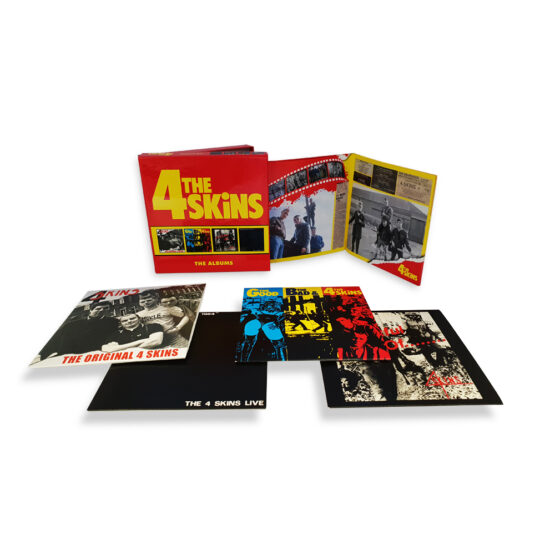 THE GOOD THE BAD & THE 4 SKINS